I was flat today…tired of being alone, tired of single parenting, wanting Nick back. I was fine, actually, until I spoke to him this morning and he played a song he’s written about our separation…it was so sad and beautiful that I cried and have been depressed ever since! I really just want this day to end and a new one to start which will, I’m sure, be much better.

Anyway. After our read-aloud about the white stallions of Lipizza, I googled the subject matter and found the official website. I called the boys over to look…they were stunned. I guess I forgot to explain that these horses are actually real, even though the story is fictional. Well, both boys (and I) were thoroughly amazed at the photos and video clips of the complex movements, particularly what is called the “Airs Above the Ground”, where the horses balance on their hind legs, or bounce on their hind legs with forelegs up, or jump and kick out fore and hind legs. These movements were originally used in wars, both for attack and defence. It was extremely interesting to read about their origins and get a bit more background on the web. 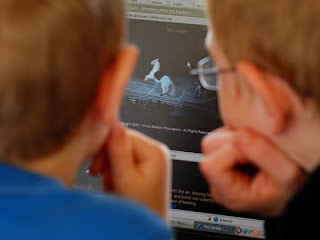 The afternoon was the usual…I scrapped and the boys played. I’m on my final page for the album now – excited that it’s nearly done and I will be able to look at it as a whole. The boys got themselves all muddy again despite my very earnest petitions to stay out of the mud…I got annoyed but it was reasonably well contained. Supper was hamburgers because I didn’t feel like cooking, but I put a slice of pineapples on each burger and had sweetcorn with it, and plus we each had two bananas today…so I’m not depriving the boys of veggies!
Posted by Nick and Lynn Clevely at 7:33 PM

I'm worried that the phone calls are having the opposite effect than what we had hoped for!
Or perhaps its just that its been 3 weeks...and thats a long time to be apart :-(