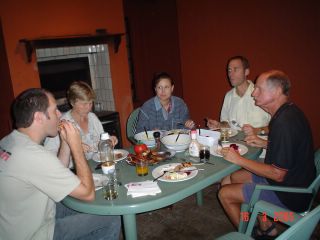 Alan and Kate join us for a meal at Magaliespark
Posted by Nick and Lynn Clevely at 9:28 AM No comments:

This update has to cover five months of Clevely happenings since the last one in November. It always amazes me how long I wait until sending one out, and then have to write this silly opening paragraph of how quickly time has gone and how busy we’ve been and so on.

To catch up on recent events, let me start last year – we had a brief holiday with Glen and Antje Thompson in December before Christmas, before they left for ministry in Port Elizabeth. We stayed with them while they were housesitting Antje’s parents’ home. Christmas saw the usual celebration with Lynn’s family on Christmas Eve, this year hosted by Alan and Kate in their new home. We were with Nick’s family on Christmas Day. New Year’s was with friends and lasted until the wee hours of the morning. Of course, the kids went to bed at their usual 7 pm, so they were ready for the first day of the new year at their usual 6 am.

We went straight back to work on 4 January, then shortly afterwards to our second attendance at the annual Grace Ministers’ Conference at Mount Grace. This was again a blessing to us and a privilege to attend. February, which was [quite] hot in Pretoria, saw the second Constantia Park Baptist Church Ladies’ Retreat. I left Nick in the care of Caleb and Aaron and went off to have a weekend of rest and refreshment. The ladies were challenged by Judy Stone to become a “Woman of Purpose”.

Nick’s dad and Sue came for a visit to South Africa from the UK in February, and a good time was had by all. It was wonderful to have them stay with us for a few days, and the boys really enjoyed re-acquainting themselves with their grandad.

In March we went away with Lynn’s parents again, this time to Magaliespark Country Hotel in the Magaliesburg. We decided to start toilet-training Aaron during this week, which was a startling success. He caught on really quickly. The week was superb – Nick and I were able to get off on our own for a morning and drove around Hartebeespoort, met a local artist and admired his work, drank tea overlooking the dam, dug around for gemstones at a scratch patch and went to the local craft market. We also took the children to the zoo, played putt-putt, went to Wimpy a few times, walked around the holiday complex and so on.

At the end of March (actually over the Easter weekend) we moved into a new home because of the owner of our previous place was selling. We were phoned by the current owner, who got our name from the estate agents, and it seemed like a good idea. We are now nicely settled. It is a simplex in a very pleasant complex, about three kms from our old place. The garden is bigger, and there is an extra bathroom, both of which are very handy!

We had a fleeting possibility of a call to New Zealand, which did not work out, but we are currently under consideration for a call to St Helena. Nick is one of three possible candidates. The church there consists of about 40 members, spread across three chapels on the island. The island is located in the Atlantic Ocean, about 1800 kms off the coast of Africa. The ministry there is apparently not an easy one, and the isolation can be a problem. We wouldn’t expect many visitors if we went, as you can only reach St Helena by a five-day boat cruise, which is quite expensive.

Nick has had a lot of preaching opportunities at different churches including our own. He continues with the youth group on Friday nights, and the young adults are now more active in evangelism, going out into the streets of Pretoria on Saturday nights.

I am continuing with German lessons, which I have been doing for about a year now. My teacher is an 80-year-old lady, fluent in English, German and Afrikaans, who takes no nonsense and has become a dear friend. Ich liebe Deutsch!! If you ask me why I am taking German, I will really have no decent response, other than, “Ich möchte eben” – I just wanted to. I guess having a German heritage had something to do with it. I can now read quite a lot of German, understand some of it, and speak a little of it, although I daren’t practice on authentic German friends for fear of ridicule. My favourite phrase to rattle off randomly is “Habe ich einen guten Anschluss, oder muss ich dort langer warten?”

Now for news of the Clevely boys… Caleb turns four on Monday, and is looking forward to his birthday. He is getting to the age that birthdays are really big, as he understands the whole party and present thing. We seem to be entering a new phase of parenting, where you have to deal with psychological issues (like not wanting to colour in because of a possible incident at playschool which has now put him off), where you have to find the right words instead of applying a wooden spoon, and figure out what’s happening on the inside. He gives thanks at mealtimes for the food, all the cooldrinks, the nice new flowers, and whatever other arbitrary stuff he can think of. Possibly this is just a stalling tactic when he’s faced with a plate of food he is not looking forward to! Aaron is very proud of the fact that he is wearing underpants, and is particularly fond of them. Not that he minds wearing a nappy during his mid-day sleep, but then his underpants must go over the nappy. He is becoming quite intelligible in his speech, although perhaps that’s the biased opinion of a mom who understands her own child’s dialect…I doubt an outsider would agree entirely with my opinion of intelligibility, but nevertheless, his vocab and speech is coming on nicely. If you ever ask him where he’s going, the favoured response is “Menlyn” (you would think we go to that shopping centre often or something). He also likes to do “know what?”… “I love you”. He remains very affectionate, and is for the most part an extremely happy-go-lucky two-year-old. The two of them are good friends still, and what the one does, the other must also do. We really enjoy them though, and give thanks to God for the blessing of children. We pray constantly for their salvation.
Posted by Nick and Lynn Clevely at 9:19 AM No comments: