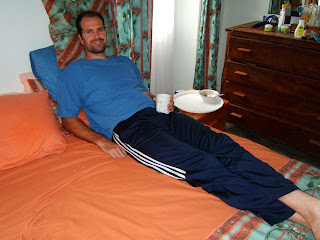 Now here’s a lovely story about the latest news in the Clevely family. It starts yesterday morning, but let me set the scene. 8 am, we’re all ready to head off to Knollcombes for a morning of work at the chapel. Nick was keen to get a handrail cemented in, and I was planning on polishing pews. Nick was just getting some buckets of sand into the car and I was inside putting in a few pieces of the global puzzle I had going on the diningroom table, when Caleb comes rushing in declaring an emergency. “Dad’s lying in the road and can’t get up”, he says. I go running outside to see my poor husband sitting on the side of the road up by the school yard, the blue bucket next to him. He had been half dragging, half carrying it towards the car, but decided it was taking too long so picked it up and turned…which threw his back out, causing him to crumple to the ground! He was totally unable to move because of the pain, but after half-sitting on the road for a few minutes, with me hovering over him looking very worried and cars going by with staring passengers, he decided to try move himself into the church, which he did by slowly and painfully shuffling and moving, until he had gotten himself into the vestry where he lay flat on his back for the next hour. Not being much I could do for him, I went off to Knollcombes anyway, as the boys were all geared up and would have been disappointed at the sudden cancellation of plans. There wasn’t too much I could really do at the chapel, as some of the pews still needed sanding, so I was home again after an hour. By this time Nick had started crawling up the aisle of the church, so I stood by watching helplessly again as he made his way up. Once he was at the stairs at the front he managed to pull himself into a standing position, and slowly walked the rest of the way home, as far as the lounge where he manoeuvred himself onto a couch, and that’s where he stayed for the rest of the day. He was undecided whether he would spend the night on the couch in the lounge or in bed, but opted for the latter which I was glad about. It took him about ten minutes to get up the stairs in the house. He slept reasonably well, although every time he had to roll over it was painful.

Today he is slightly improved, but still mostly immobile. He spent the morning on the bed and the afternoon on the couch. He can’t even get to the hospital to see about his back as it’s too sore to move around so much at present, so perhaps he’ll go on Monday. Yesterday morning, realizing that he wouldn’t be going anywhere in a hurry, he phoned the governor to arrange for him to preach tomorrow, so that’s taken care of. It’s a real shame that Nick has to miss the opening of Knollcombes though, especially after all the work he’s put into it.

This morning I had to finish off the curtains, then do some quick prep for Good News Club as I was doing the teaching. When my Nick isn’t there I have to lead the worship too which I don’t really like doing, but I didn’t really have a choice in the matter! The kids were fairly subdued today, and afterwards during the playtime a couple of the girls made ‘get well soon’ cards for Nick, which they wanted to deliver. A lot of the girls came home here to ‘have a look at him’ – he must have felt like a real freak show!

We had chicken legs and mealies for supper tonight, which were delicious. The boys managed to eat them off the cob, although Caleb didn’t enjoy his very much. Aaron ate with gusto, and I told them about the mealies we used to eat from Grampa’s vegetable garden at 6 Protea Road! I smiled to myself when we were instructing the boys to eat the corn off the cob in rows, systematically, as this is what my dad used to tell us and we didn’t appreciate the advice!
Posted by Nick and Lynn Clevely at 7:56 AM

SORRY FOR MY ENGLISH.
HI FROM GREECE.
I 'M 11 YEARS OLD.
CAN YOU VISIT MY BLOG http://lefobserver.blogspot.com/ IN ORDER TO I TAKE THE FLAG OF SANTA HELENA AND IT IS WRITTEN IN MY MAP OF VISITORS?
THANK YOU VERY MUCH.